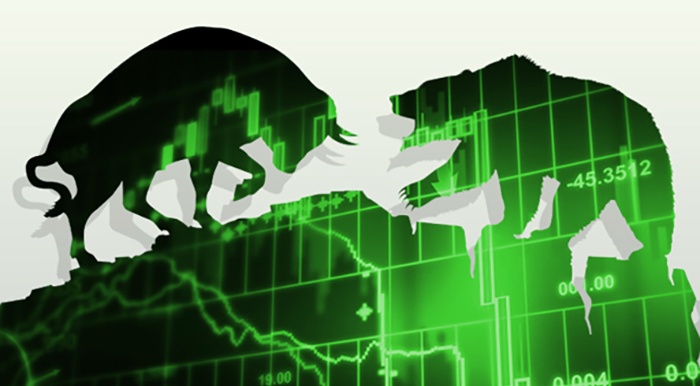 Bearish vs Bullish; outlook for a stock market bull is much stronger

Flashback; Dow today looks like Dow yesteryear. The pattern the Dow is tracing is jarringly similar to that of 2011.  If history is going to serve as a guidepost, then the Dow could be ready to roar as opposed to being down for the count.  When the markets were plunging in 2011, the same question was posed. Is the Dow going to crash, is the bull over? Turns out that the so-called crash was nothing but a hiccup in what turned out to be one of the most massive Bull Runs of all time. Now we are faced with the same paradigm, and once again the talking heads (many who actually have the audacity to call themselves experts) are marching to the same drumbeat and chanting the same song of doom.

We have repeatedly stated over the years that we are living in an era of lies and deceit, where the laws of reality have been suspended and master of deception (A.K.A central bankers) have helped create an alternate reality. In this reality, savers are punished and speculators are rewarded. Markets have been manipulated for an extraordinary period of time by artificially holding down interest rates for a record period of time.

As we live in an era of lies and deceit, where rampant manipulation is the order of the day; worse still, no one is contesting this manipulation.  The masses have embraced that this is their destiny and surrendered to this new market norm.

This new norm rewards speculators and punishes savers. Under such circumstances, it makes no sense to focus on Bull vs bear market argument. Instead, focus on the Stock Market bull aspect only.

The laws of reality have been suspended (courtesy of the masters of deception, otherwise known as the friendly Fed), the markets will only crash if access to easy money is eliminated. This hot money is the main driving force behind these markets and will continue to be so in the foreseeable future. Against this backdrop of trickery and dishonesty, normal market rules cease to apply.

Sentiment not bullish; all strong corrections should be treated as buying opportunities

our contention has been that every major correction for the past several years is nothing but the market letting out a well-deserved dose of steam; a massive crash is not the makings; at least not yet. One day the markets will crash, but as this market is being propped up a by hot money, anything and everything will be done to prevent the markets from crashing. If there was any dose of freedom left in these markets, they would have crashed long ago. Therefore, once again, do not waste time on the  Bull vs bear market theme; instead, pay attention to the trend. As the trend is bullish the markets are expected to trend much higher.

There is a stark difference between thinking you know what will happen and from knowing what is going to happen. Mass psychology clearly states that markets usually run into a brick wall when the Crowd is Euphoric and chanting “Kumbaya my love”. This is not the case yet and sentiment is far from the euphoric zone.  This is one of the most hated bull markets in history.

Bearish vs Bullish; It’s 2011 all over again

The predictions that Dow was destined for destruction during the correction of 2011 might have appeared erudite in nature. Those predictions, now in retrospect, sound more like the ravings of a lunatic. Be wary when the masses are joyous and Joyous when they are not, that in essence is the most basic tenet of mass psychology.

Markets climb a wall of worry

In 2011, the Dow ended the year on a positive note, defying all the predictions of disaster.  Three months into the new year (20120, the Dow soared to a series of new highs. Like cockroaches, the naysayers vanished into the woodwork waiting for another day to sing the same old monotonous song, buoyant that time would make the masses forget the old proclamations and embrace the new ones; this falls dangerously close to the definition of insanity. Doing the same thing and expecting a different outcome.  So far the outcome appears to be the same and if the pattern is repeated, then these chaps are going to get clobbered.

Outlook for the Dow 2017 and beyond

During the so-called market crash phase that started in August, the Dow from high to low shed approximately 16.3%. Strikingly close to the 16.2% that the Dow gave up during the 3rd quarter of 2011.  So far, in the 4th quarter, all the major market indices are faring much better as was the case back in 2011.  In the 4th quarter, the Dow has tacked on almost 5%.

Bearish vs Bullish; there is no case for a Bear market; take a look at this chart

The VIX, which is an index that measures fear blasted as it was being chased by the hounds of hell. ItX surged to a new five-year high, pointedly illustrating that the masses were hysterical.  Panic is the secret code name for opportunity.  Mass psychology clearly indicates that when the crowds panic, the astute investor should be ready to jump in.

Bearish vs Bullish outlook; here is our game plan

Fear has to be avoided under any circumstance when it comes to investing. It is a detestable emotion that just sucks you dry. It takes and gives nothing back in return. When the crowd panics, one should resist the urge to become one with fear and the crowd. We are not in the jungle and fear is a useless emotion when it comes to making money in the markets. Get rid of it or it will get rid of you. Fear is a parasitic emotion; the only good parasite is a dead parasite. So shoot to kill when it comes to fear

To break even for the year, the Dow only needs to trade approximately 600 points higher. If examines the entire journey (up and down) the Dow traversed from August to Oct,  the count comes in at roughly  5000 points. Examined from this angle, 600 points does not amount to that much; the Dow still has roughly three months to achieve this objective.

The Trend supports a bull market but ride up is expected to be volatile.

The  V-indicator is trading well above the danger zone; 1100 points higher to be precise.  This means that extreme volatility is going to be the order of the day. One should not expect the ride up to be smooth.  We have a fair amount of resistance in the 17300-17400 ranges.  The ideal set up would be for the Dow would trade in these ranges, with a possible overshoot to 17,600 and then proceed to test 16,500-16,600 ranges.

Bear in mind that the above targets should serve as rough guideposts.  We never focus on trying to identify the exact bottom or top, a task we think is best left to fools with an inordinate appetite for pain. The game plan should be to view all strong pullback as buying opportunities.  Line up the stocks you love, and then use strong pullbacks to open new positions in them.

What will you do? Wait for this event to pass and then reminisce over what you should have or could have done, or will you muster the courage to act decisively.

Focus on the Trend and not the noise