Remember that when the markets eventually correct, this correction will be broadcasted as a crash (that’s the name of the game; scare the hell out of the masses) and it will be blamed on Trump. No, we are not getting sentimental on Trump. In reality, each president has only so much room to do what it is good for the people; most presidents don’t even use this little leeway they are given but focus on themselves.  As long as Fiat is around, every president will be bought and paid for. The big players have trillions at their disposal, so the dream of finding a great leader is just that, a “big dream”. Mass psychology covers the aspect of mass manipulation very well and how the top players go out of their way to create situations that will alter the masses angle of observance. Alter the angle and you alter the outcome by altering what the masses deem to be true or false.

Freedom is an Illusion

You are only free to do things that you are allowed to do, and this includes the president. Reflect on that we will expand on it later; we already provided you with a big hint. In case you missed the hint is “fiat money”.  At the tactical investor, our focus is on dealing with reality and spotting new trends. Everything else falls into the idle gossip category. It might feel good to rant and rave about stuff like this, but it is a waste of energy.  The focus should be on finding a way to play with the hand that you have been dealt.

The markets follow the same path; until Fiat is eliminated this talk about the world coming to an end is nothing but rubbish. All those self-proclaimed masters of wisdom are either dead, dying or becoming highly irrelevant. Focus on the trend for that is all that matters; it is the only way to maintain your health and your wealth.

This market will experience many corrections in the years to come, some will be mild, some will be strong, and some will appear to be devastating. If you follow the trend, you will know when to move into cash and when to jump in. From a “super trend perspective” every back-breaking correction (emphasis on back-breaking) should be viewed as a long-term buying opportunity.

Trump’s presidency has made for some entertaining Moments

Overall the Trump presidency has made for some pretty damn good free entertainment; it is quite amusing to watch the other side react and equally amusing to watch the nonsense the Trump Team can come out with at times to defend their position. As time passes by, it appears that Trump is focussing more on himself than on making the country great. Who knows, he might suddenly change direction; he has a habit of doing the unexpected.

From a psychological perspective, you should hope that some shock announcement is made regarding “Trump”; it will scare the hell out of the masses, and the market will drop like a rock creating a lovely buying opportunity.

The press has always gone out of its way to twist the news and sell the masses rubbish, especially when it comes to the financial markets. However, the veil has fallen completely after Trump won the presidency. The utter garbage they focus on illustrates that IQ is no longer a pre-requisite.  We would not be surprised to find out if most of those individuals who pass for reporters have an IQ that is slightly above 70. An IQ of 70 equates to that of a retard. However, on the flip side imagine how difficult it would be if everyone were a genius, so be grateful for these penguins, as their reality is based on what they read. They make trading the markets infinitely easier as their behaviour is predictable.

From an Investment perspective- Trump Administration is bullish for the markets

Trump is bombastic, so he will go out of his way to say things that will shock the markets but as the primary trend is bullish, these pullbacks ranging from mild to wild should be viewed through a bullish lens.

The Fed via fiat money indirectly controls the media; the press through the garbage they print and pass of as news control the masses.  You could not ask for a better setup of mind control; the masses think they are free, but they are not; they are free to make decisions in areas that do not matter. Look around slowly and determine for yourself if they are free. 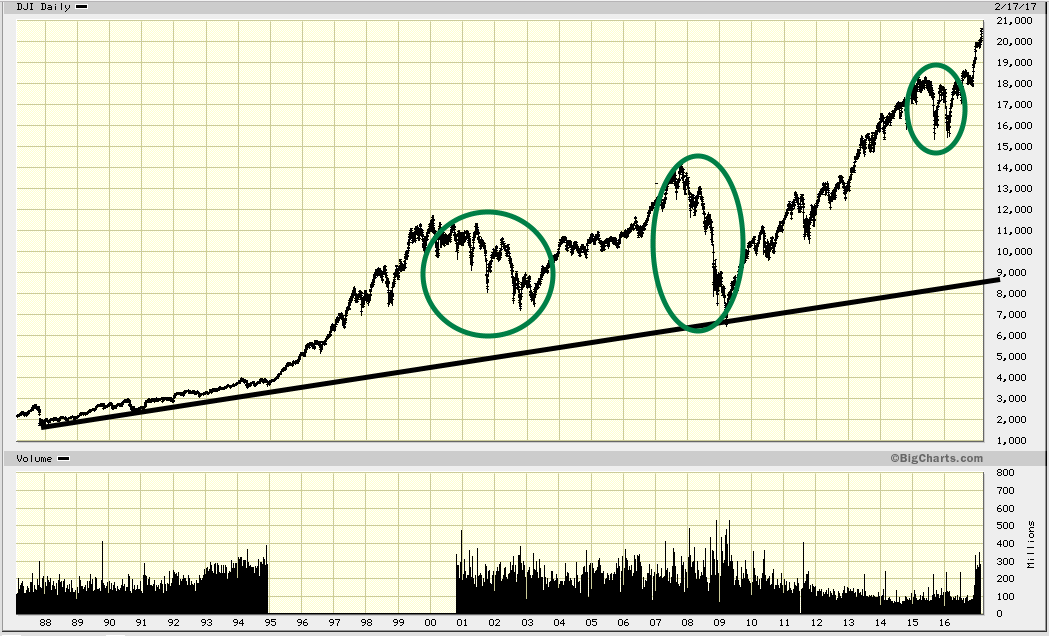 Sit down and watch the show for are things about to get more interesting and nuttier at the same time.  We suspect a lot more heads will roll and the cries of rage and frustration will soar to heights never seen before.  Market Update May 19, 2017

All massive corrections should be viewed as buying opportunities provided the underlying trend is up (bullish). The stronger the deviation from the norm the better the opportunity

What is Boom And Bust Cycle
A boom and bust cycle is a process of economic expansion and contraction that occurs repeatedly. The boom and bust cycle is a key characteristic of today’s capitalist economies. During the boom the economy grows, jobs are plentiful and the market brings high returns to investors. In the subsequent bust the economy shrinks, people lose their jobs and investors lose money. Boom-bust cycles last for varying lengths of time; they also vary in severity.
BREAKING DOWN Boom And Bust Cycle
Since the mid-1940s, the United States has experienced several boom and bust cycles. Why do we have a boom and bust cycle instead of a long, steady economic growth period? The answer can be found in the way central banks handle the money supply.
During a boom, a central bank makes it easier to obtain credit by lending money at low interest rates. Individuals and businesses can then borrow money easily and cheaply and invest it in, say, technology stocks or houses. Many people earn high returns on their investments, and the economy grows.
The problem is that when credit is too easy to obtain and interest rates are too low, people will overinvest. This excess investment is called “malinvestment.” There won’t be enough demand for, say, all the homes that have been built, and the bust cycle will set in. Things that have been overinvested in will decline in value. Investors lose money, consumers cut spending and companies cut jobs. Full Story

Boom and Bust Cycle, What Causes It, and Its History

The boom and bust cycle is the alternating phases of economic growth and decline. It’s how most people describe the business cycle or economic cycle.

In the boom cycle, growth is positive. If the gross domestic product growth remains in the healthy 2-3 percent range, it can stay in this phase for years. It accompanies a bull market, rising housing prices, wage growth, and low unemployment.

The boom phase doesn’t end unless the economy is allowed to overheat. That’s when there’s too much liquidity in the money supply, leading to inflation. As prices rise, irrational exuberance takes hold of investors. The GDP growth rate grows above 4 percent for two or more quarters in a row. You know you’re at the end of a boom phase when the media says the expansion will never end and when even the grocery clerk is making money from the latest asset bubble.

The bust phase is like life in the Middle Ages. It was brutish, nasty, and mercifully short. It usually lasts only 18 months or less. GDP turns negative, the unemployment rate is 7 percent or higher, and the value of investments falls. If it lasts more than three months, it’s a recession. It can be triggered by a stock market crash, followed by a bear market.

A stock market crash can cause a recession. As stock prices fall, everyone loses confidence in the state of the economy. When investors don’t feel confident about the future outlook, they pull out their investments. Full Story

Causes of Boom and Bust Cycles

Causes of boom and bust cycles

If monetary policy is too loose, it means real interest rates are too low given the state of the economy, e.g. UK economy in late 1980s. Loose monetary policy reduces the cost of borrowing and mortgage payments (increasing disposable income). This will cause a rise in investment and consumer spending. This rise in aggregate demand can cause excessive growth in the money supply and cause economic growth to be above the long run trend rate.
In the post-war period, the UK has had a long run trend rate of around 2.5%. This means that typically, productive capacity (AS) increases by about 2.5% a year. If interest rates are kept low, aggregate demand (AD) will increase much faster then the rate of productive capacity and economic growth will be too high. If economic growth is substantially above the long run trend rate, we will tend to see: