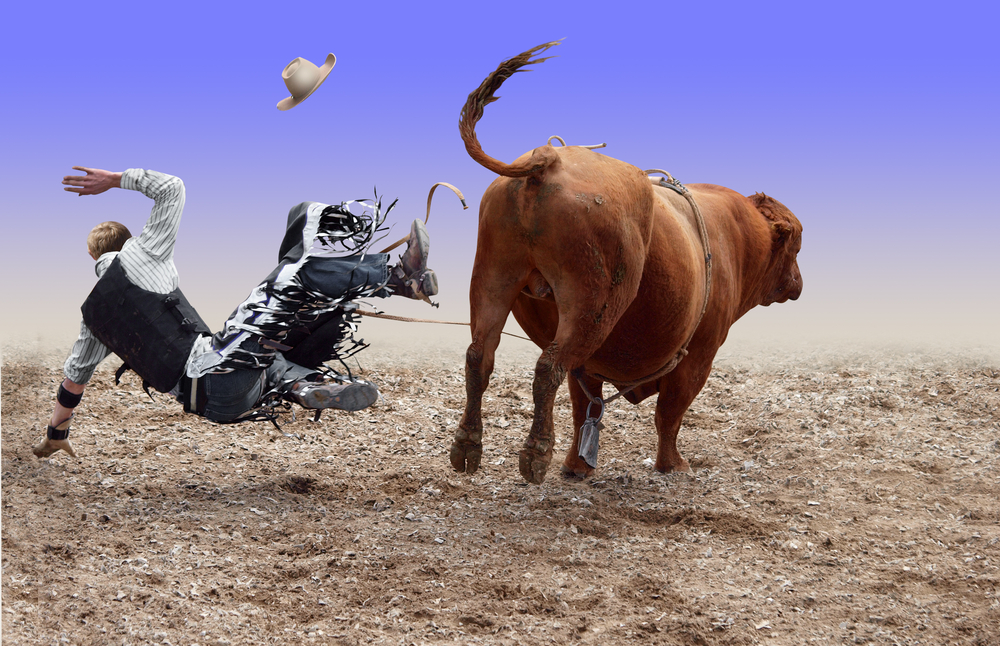 Throughout this bull-run, a plethora of reasons have been laid out to indicate why this bull should have ended years ago. Mind you most of those reasons are valid, but that is where the bucket stops. Being right does not equate to making money on Wall Street. In fact, the opposite usually applies.  The Fed recreated all the rules by flooding the markets with money and creating and maintaining an environment that fosters speculation.

This is the most hated bull market in history is because logic states it should crash.  In the 2008-2009 volume on the NYSE was in the 8-11 billion ranges and sometimes it surged to 12 billion. Before that, every year, the volume continued to rise, this indicates market participation. From early 2010 volume just vanished, it dropped to the 2-3 billion ranges and even lower on some days.   Hence, all market technicians and students of the markets assumed that the markets would tank as markets cannot trend higher on low volume and that is where they erred.

The US government stepped in and started to support the market directly that is why volume dropped so dramatically. However as there were no sellers, the markets drifted upwards. Later on, they got the corporate world in on the scam.   They set up the environment that propelled corporations to buy back their shares by borrowing money for next to nothing and then using this trick to inflate their EPS, without doing any work or even increasing the profitability of the company. Mass Psychology states that the masses are destined to lose; do not follow the crowd for they will always lead you

Article of Interest: Why most investors lose money in the stock market

Mass Psychology states that the masses are destined to lose; do not follow the crowd for they will always lead you astray.In between a few minor corrections were allowed to transpire almost all of which took place on ever lower volume, to create the illusion that there was some semblance of free market forces at play.

We also have something known as Dark Pools, this, in essence, allows big companies to purchase large blocks of shares without the trade showing up on the NYSE or any other major exchanges. In essence, it gives the government an avenue to manipulate the markets without actually leaving a footprint.  As the US can print as much money as it wants, this is a perfect backdrop to do whatever it wants.  By the way, don’t believe the hogwash that our debt is only 18.9 trillion.  There is no real mechanism in place to check how much money the US creates.  Nobody is allowed to audit the Feds books.

Fed’s objective is to devalue the US dollar

The Fed is hell bent on forcing everyone to speculate, and that is why we have moved into the next stage of the currency war games and the era of negative interest rates.  Negative rates will eventually force the most conservative of players to take their money out of the banks and speculate.  This process will be akin to another massive stimulus and will provide the bedrock for another huge rally.

Make a list of stocks that you would like to own and use strong pullbacks to add to or open new positions in.  Some examples are OA, AMZN, BABA, GOOG, CALM, CHL, etc.

Published Courtesy of the Tactical Investor 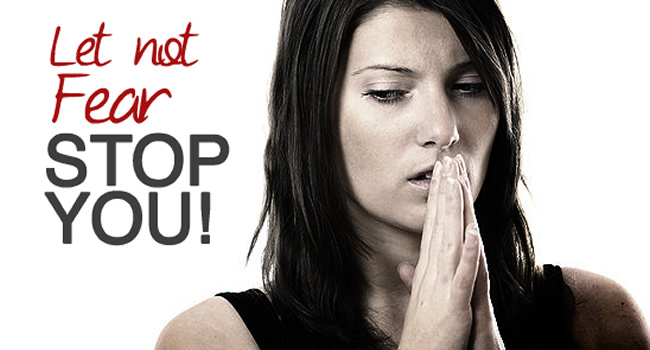 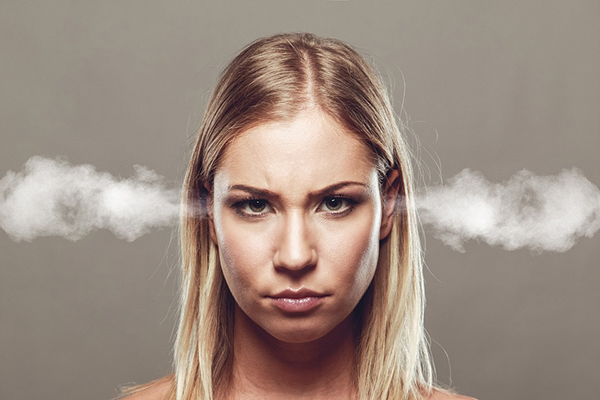 Stock Market Investing is all about not allowing one’s emotions to do the Talking; once your emotions start talking your money starts walking away from you. The financial crisis of 2008 scarred many individuals and scared away even more; add in the Great Recession, and one can see that the average Joe can come up with many reasons to avoid the stock market. However simple market sentiment analysis could have saved many a person from losing a significant portion of their wealth.   To make matters worse, the unemployment rate remains stubbornly high, and wages in most instances are dropping instead of rising which means that many Americans have little to no disposable income left after expenses. Don’t for one second believe the twisted statistics issued by the BLS (Bureau of labour department); those statistics are on par with toilet paper.

Stock Market Fear: Individuals making $30,000 or less per year are more likely to avoid the stock market, citing insufficient funds as one of the main reasons. There appears to be a misconception in thinking that one needs a lot of money to invest in the markets. Nothing could be further from the truth.  One can start off with small amounts and slowly add to this base over the years.; the power of compounding is amazing. If you start young enough even putting away $50-$100 a month can add up to a sizable bundle by the time you retire.

This is just another misconception that has grown especially after the devastating crisis of 2008.  If one is investing for the long haul and in quality stocks, then investing is one of the surest ways of making money and building a sustainable nest egg. However, one needs to understand what one is getting into and not plunge into the markets blindly as is the case with most individuals.

People assume  that investing is hard to learn or master 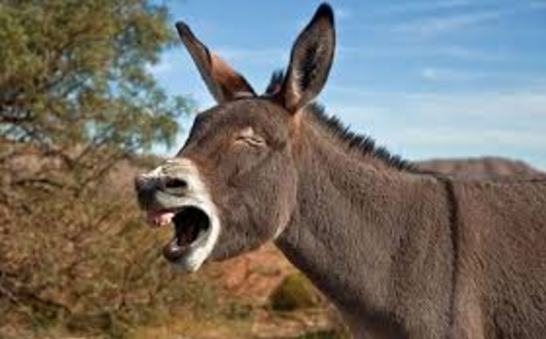 We are referring to financial education and not higher education from institutes such as colleges or universities. We would even go as far as to suggest what these institutes teach regarding the stock market is useless. As with everything in life, if one wants to master a new skill, one needs to set some time aside for this endeavour.  If you are going to talk the talk, then be ready to walk the walk. Don’t expect some expert to guide you to the promised land, for you will find that instead of finding paradise you are more likely to be welcomed into Hell.

Regarding the stock markets it would be wise to look at the history of the markets; study past stock market crashes; the events that lead to the crash and events that set the foundation for the next bull run.  Then paper trade before deploying your hard earned cash?

If you are going to rely on a financial advisor; how are you going to know if he is not selling you sack of sawdust if you know next to nothing. In most cases people set themselves up to lose in the markets or to be taken advantage of; it takes two to tango. Surveys done by bank rate shows that Millennials were twice as likely as any other group to cite lack of financial knowledge as their main reason for avoiding the markets.  If this trend persists, they are going to be ten times more likely to ask the government for handouts when they retire.

Most Investors Distrust the Financial Markets

Yes, one could say there is a valid reason to fear the markets as many Millennials have grown up in an era of financial disasters; two of the most painful ones were the dot.com bubble and the Financial Crisis of 2008, which later came to be known as the Great Recession.  However, again, lack of financial knowledge and the wrong perspective is what provides the foundation for this fear.  Fear is a useless emotion when it comes to the stock markets; the best time to buy is when blood is flowing freely; translation, so-called disasters always provide opportunities for the astute investor.   Additionally, one could have easily sidestepped both disasters by paying attention to market sentiment; in both instances the masses were euphoric, and they thought the bull market could last forever. Nothing lasts forever and when the masses are ecstatic it is time to leave the party. Disaster can be viewed as an opportunity or as a tragedy; it all comes down to one’s perspective. Alter the angle of observance and the perspective changes.

The Concept of retirement planning is nonexistent for many

Bankrate states that only 25% of Americans check their investments and retirement accounts more than once a month. These same individuals can spend countless of hours on their phones texting each other or on Facebook or otherwise known as Face Crack.  One does not need to look at one’s investments every day, however, spending time on finding out what’s trending or where the crowd is leaning could make the difference between banking your profits or trying to catch a falling dagger.

Ideally, individuals should have a rough idea of how much they would like to have by the time they retire and then come out with a feasible plan. Otherwise, they are bound to come up with some harebrained scheme that is fuelled by fear when they suddenly realise that the years have passed away, but the account is looking as miserable as it did on the day of its inception.

Fear and Greed drive the masses; they are Euphoric before a market crashes and panic close to market bottoms

Disaster is usually opportunity knocking in disguise, instead of running, stop and give it a massive a hug. The chart below clearly indicates that stock market crashes and other negative financial events are nothing but mouthwatering long-term buying opportunities. 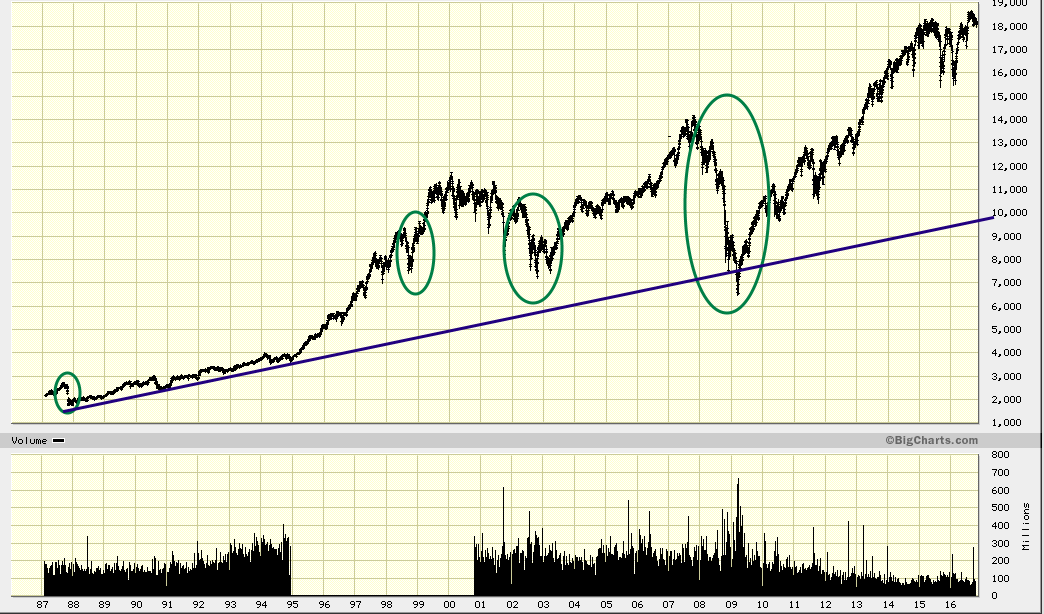 The financial world often refers to black Monday (the crash of 1987) when they want to ratchet up the fear factor; on a long-term chart, it is just another blip that more aptly represents an opportunity rather than a disaster. In every instance before the market pulled back firmly, the sentiment was extremely bullish; in other words, the crowd was euphoric. If you used just followed the emotion you would have managed to avoid almost every disaster and this dates back to the tulip bubble. We are not talking about timing the exact top; those that try to time the exact top usually have plenty of time on their hand and an enormous appetite for pain.

For the masses, sharp pullbacks feel like a crash because they have the uncanny ability to buy exactly at the wrong time; they buy high and sell low.  We will examine the concept of opportunity being masked as a disaster in a future article.

How Fear and Greed  to your advantage

The word disaster represents an opportunity for the astute investor. It is only the uneducated investor that views a market pullback through a negative lens, and this is usually done because they have not taken the time to study the markets.  One would be well served if one spent some time in examining the history of stock market crashes and what was taking place before the markets crashed. In every instance, one will find out that the crowd was bullish and every Tom, Dick and Harry was busy giving out financial advice.  When the crowd is happy, you should leave the party.

Spending a little time on history and market psychology could prove to be priceless. If you take the time to do this, you will have a better understanding of the markets than most so-called financial experts.  The phrase “knowledge is power” was not coined for no reason, but there is a difference between knowledge and rubbish. When it comes to the stock markets, most of the stuff that is marketed as valuable is nothing but garbage and in many cases what the experts make fun of is what you should be paying attention to.

For instance, market sentiment is far from bullish even though the stock market is trading close to its highs. Hence, all sharp pullbacks have to be viewed as buying opportunities. When the crowd embraces this bull market, it will be time to leave the party.