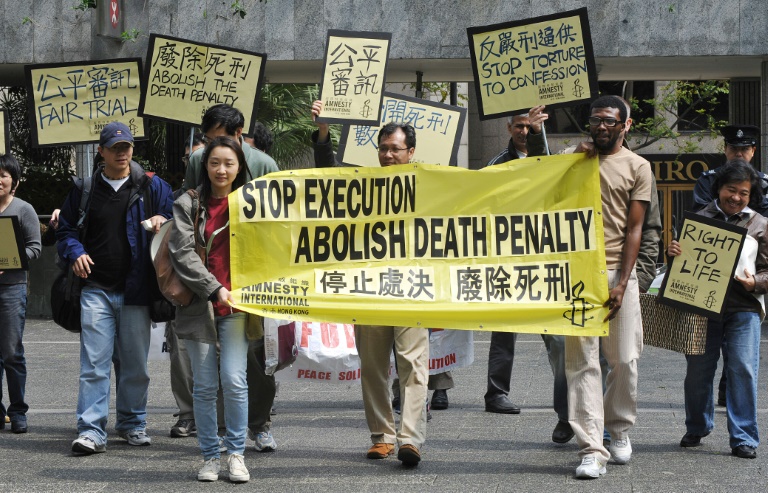 Beijing (AFP) – Thousands of spectators filled a stadium in China to watch 10 suspects be sentenced to death for crimes ranging from drug-dealing to homicide before they were taken away to be executed at the weekend.  An online video of the rare public trial, held in southern Guangdong province on Saturday, showed the handcuffed suspects paraded around a track by uniformed police officers as onlookers watched from the sidelines.

The convicts also stood on a podium as their sentences were read over loudspeakers, while officials sat on a stage flanked by military guards. Rights groups say China executes more people than any other country, but Beijing does not give figures on the death penalty, regarding the statistics as state secrets.

A public announcement last week from Lufeng City People’s Court had invited citizens to sit in on the “open-air stadium trial”, as it was dubbed by the state-run Global Times. Beijing News, which circulated the trial video along. Full Story

Political correctness is going away, and this trend as we stated recently is set to last at least 15 years. Violence levels, for now, will continue to soar, but the response from governments especially in Asia and Eastern Europe is going to be just as brutal. The West will eventually join the pack.   A leader is set to emerge that is going to make Trump look like a very polite gentleman.

McDonald’s has cold brew now, and what is coffee anymore?

In fairness, it was only a matter of time before the cold brew craze found its way to the massive fast-food chain. McDonald’s debuted its own cold brew beverage in two varieties: frozen coffee and frappe. This is the part where you swear you’ll never try it, and then give in four dayslater because you’re “curious.” Full Story

Tamara Pletnyova, the head of the Russian Duma’s Family, Women, and Children Committee, says to be especially careful if a potential father is “of a different race.” Her comments come as Russia is desperately trying to convince the world that it’s ready to tackle the racism that many are predicting will come along with the World Cup. Incidentally: Happy World Cup day to you! Full Story

If you’re familiar with the fandom of the video game, you might say, “Of course, this was inevitable.” For the uninitiated, Fortnite is a multiplatform game where 100 players vie for resources and compete against one another to be the last person standing. It’s also the reason you haven’t seen some of your loved ones in weeks. The Fortnite tournament will be open to all players, with qualifying tournaments starting in fall 2018. Full Story