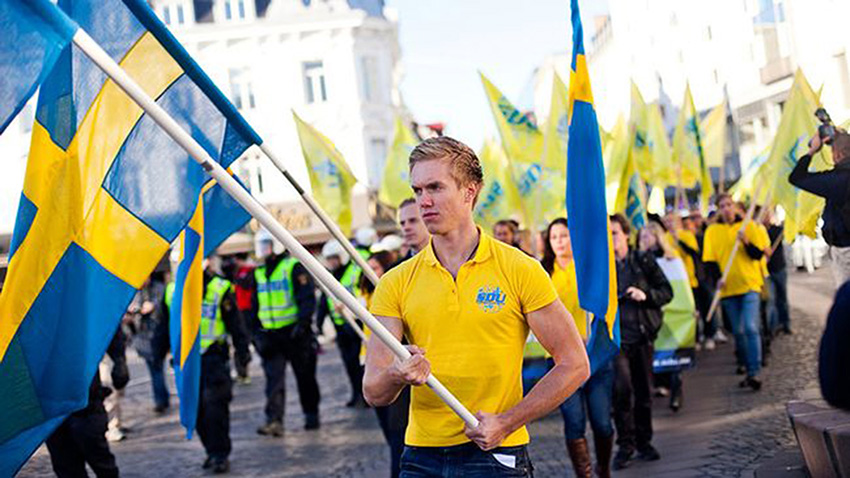 STOCKHOLM (Reuters) – Sweden’s top three parties are running almost level four months ahead of a general election, with the anti-immigration Sweden Democrats polling a record 20 percent, according to poll in daily Dagens Nyheter. Support for the Sweden Democrats has surged since they first won seats in parliament in 2010, with the party on track to record its best ever election result after getting 13 percent in 2014. A surge in asylum numbers in 2015, when Sweden took in 160,000 refugees, has heightened worries about a creaking welfare state and that crime is increasing, boosting the party, which wants to close Sweden’s doors and crack down on gangs. The ISPOS poll put the Sweden Democrats hot on the heels of the governing Social Democrats, who got 24 percent, and the biggest opposition party, the center-right Moderates, who scored 22 percent.

At the last election the center-left Social Democrats got 31 percent and the Moderates 23.3 percent. The current government is a minority coalition of the Social Democrats and Greens. They are supported in parliament by the Left Party. Together, the parties polled 37 percent. The Moderates, Centre, Christian Democrats and Liberals cooperate and will fight the election as a group. They polled 39 percent Full Story

The Viking blood still runs strong in many of the Scandinavian nations and while time has cultured the fierce Vikings, the current state of affairs is starting to stir things up and as this trend gathers momentum we fear that these once quite people will reveal a side of them that the world has not seen for a long time. The Vikings were extremely ruthless and note that the Russians also have Viking blood.   We mention this because it takes a lot to provoke the Russian bear, but once provoked the bear will not rest until it has destroyed its enemy.  Vikings were twice as volatile; they were not afraid to fight; they actually relished a good and bloody fight.   Given the strength of this trend there is a fairly high probability that some leader will emerge in this area with strong Viking roots and start talking about days gone by; if this comes to pass, all hell could break loose.  The main target of this rage will be Muslim immigrants as they are being labelled as invaders with increasing frequency and the attacks are gradually  becoming more violent.

If someone comes to power and starts talking about how strong the Vikings were and how the Norwegians, Danes, etc. need to stand up to the invaders (this is the term that is often used today), it will be an indication that the above outlook is coming to fruition. The rhetoric at first will be rather mild, but don’t confuse this mild rhetoric for inaction.  Focus on whether the Viking factor is mentioned, if it is, then the odds of it turning violent are quite high.

We are not rooting for the above outcome, nor do we favour such an outcome but we would be doing our subscribers a disservice if we did not talk about a potential trend that appears to be gaining momentum.