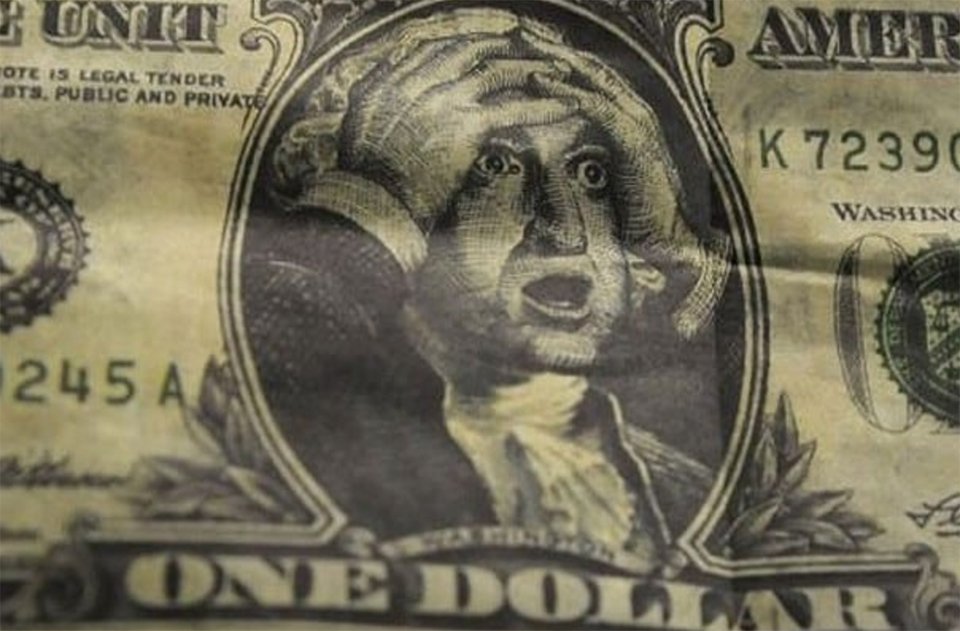 Fiat Money The Root Of All Things Bad

Fiat Money: The mother of all evils is fiat. Without Fiat, none of the above developments would have taken off. As money can be created out of thin air, those in the know have unlimited mechanisms to increase their wealth easily. The devastating boom and bust cycles the markets experience are not natural; they are created. Each cycle is pushed to the MAX in order to create more of an opportunity for those in the know how. Now if you control the money, you can purchase all the main media outlets. When you control the media and the money supply you are king of the hill; less than 10% of the populace is strong enough to resist from falling for what they have directed to see.

The left and the right are being directed;

They are both being played, and none is the wiser.  This technique is used everywhere. The strategy employed is to provide the masses with two to three options to give them the illusion of choice but all the choices lead to the same outcome, and that is what they fail to see.  When one takes an extreme position it does not matter whether you are swinging to the right or to the left, you are being controlled and it’s impossible for that person to see anything else besides the data they have been fed.

So how does this all tie up; all those events we briefly mentioned are being used and will be used to polarise the crowd even more? What is immoral today is moral tomorrow; what changed? The only thing that changed was the perception. So if you program children young enough with the perception you want, you can make them accept almost anything as moral, and that is what the public education system is all about.  Remember nothing is free and what appears to be free usually ends up costing you 10X more down the line. One wise man I knew would often use this sentence when anyone made references to free stuff. He would say I am not rich enough to accept free things.

Fiat Money is behind everything

As Fiat is behind everything, and the money supply continues to go ballistic, we can expect levels of polarisation to soar to levels that are unimaginable today. With an unlimited supply of money and a vast understanding of the topic of Mass psychology, there is almost nothing in place to stop the top players from pushing these trends to their limit. The only defence is not to allow your emotions to do the talking, sit down and imagine its reality TV minus the Boob tube.

We have gone on record for several years on end, stating that market crashes are nothing but buying opportunities and today we provided a brief glimpse into the reasoning behind this stance.  There is no way the Fed is going to allow the markets to crash and burn. They will create the illusion of a crash, and the masses will react in the way they have been programmed to react; dump the baby with the bathwater. The conniving top players will come in and scoop everything.  What separates a correction from a crash? Your entry point; the early bird gets the worm, and the late bird has to contend with the bullet.  That is why mass psychology states that one should sell when the masses are euphoric and buy when the masses are panicking or in a state of uncertainty.

Take a look at these charts, and a pattern will start to emerge

The shaded areas represent recessions, and a recession usually follows a disaster.  After each recession, the currency in circulation continued to soar.

The same thing occurred with M1 money stock, and after each recession, the M1 money stock surged even more. Look at the spike after the 2008 financial crisis.

Moreover, the same can be said of the monetary base, but the move in this chart was explosive after 2008.

In 1790 the national debt was a minuscule $75.4 million, and today we add more than that on a monthly basis. So when experts especially from the “hard money camp” state that the masses will revolt one day. The only part that is true in that sentence is “one day” but that day could be decades away from today because their perception has been altered. They believe that the dollar is good as gold and as long as they believe that, Fiat has no chance of being unseated and nothing is standing in the way of the national debt moving to $100 trillion.  If it could move from $75.4 million to almost $21 trillion without the masses revolting; the move from $20 trillion to $100 trillion is paltry by comparison

So what stands out is that the principles of Pavlov have been used wonderfully against the American and now the world populace at large. The masses have accepted that if there is a crisis, the government will find a way to solve it. Indeed they will find a way, but they will pass the bill onto the unsuspecting masses in the form of inflation and taxes;  double whammy for inflation is a silent tax.

Therefore we can make the following conclusions

You can only provide the masses with a solution if you manufacture a disaster that appears to be so terrible that the masses will accept conditions they would not have accepted before the disaster because they have been led to believe the aftermath will be infinitely worse. It is a win-win situation for the top players; they get their cake and their pie.  This is why we do not fear stock market crashes because we understand the game plan and we know that the masses will always be used as cannon fodder.

Having said that, jumping and buying stocks when the markets are crashing is not an easy thing to do. We spent over a decade in coming out with the trend indicator, and we have our custom indicators to inform us of when a trend change is close at hand or when the markets are exhibiting definite signs of a bottom.

What are the average player’s options?

Take time to understand the main principles of Mass Psychology as without that you will give in to fear every time the market’s pullback strongly. Understand that our first reaction is to flee when confronted with any danger, don’t fight that feeling, study it and understand it for it is. When you study it, you will come to see how bad such emotions are and in doing so, you will have moved to the stage where you will have the power to say yes or no when exposed to a similar situation.  Read history books; you do not have to learn from your experiences only; you can learn by studying the reactions of other people

Once you have mastered that, find 2-3 technical indicators that appeal to you.  They must appeal to you; don’t just choose them because they sound fancy or they are promoted as being the best ones out there.  Once you find some appealing technical indicators, study them and look for patterns.  Technical analysis is like art; beauty is in the eye of the beholder.  Use long-term charts preferably weekly and monthly charts.

Boom and Bust Cycles Are Primarily Due To Fiat Money

Make the Masses focus on other factors so they don’t focus on the Fiat Money Factor
The ploy from the day we got of the Gold Standard has been to redirect the masses attention. The masses are directed to focus on they could buy with all this money. In other words, Fiat money appears to be incredibly valuable, even though it has no intrinsic value.

To cement this illusion, a small segment of the population is paid fantastic salaries and their flamboyant lifestyles are broadcasted for everyone to see. The goal of creating divisions in society is to make one group of individuals wish for the lifestyle that this other group is living. The more divisions you create, the greater the cover; in other words, these divisions are created to ensure that the masses forget the real task at hand. This has worked very well, for almost no one today questions Fiat. Their main agenda today is to make more money so that they can lead a better life; little attention is paid to the fact, that they have to work harder and harder for less and less. The money they are paid is constantly being diluted; this is the true defintion of inflation. An increase in the money supply and not an increase in prices. Rising prices are only the symptom of the disease. Full Story

Unlike commodity money which is covered by the value of the precious metal it was created from, usually silver or gold, the value of fiat currency is dependent on the interaction between demand and supply forces. The parties, buyer, and seller, engaged in its exchange will come to an agreement on its value.
Fiat is a Latin word. Translated into English, fiat means “Let it be done”. Fiat Currency is money that does not have intrinsic value but is recognized or accepted as a form of legal tender through government regulation. To read more about fiat currencies click on the following links to jump to the correct sections:
While most money was backed by physical goods or precious metals, fiat currency is contingent on people’s belief and faith in a country’s economy.

Many of today’s paper money is considered fiat money. They do not carry user value. The function of the paper money is to facilitate a payment. A government would produce coins out of precious metals and manufacture paper currency that would have an equivalent value in terms of a physical good. In the case of fiat currency, it cannot be redeemed. Neither can fiat currency be converted.

Fiat currency because popular and widely used in the 20th century particularly during the period of 1968 and 1973 when the Bretton Woods Agreement was terminated and the United States no longer allowed the U.S. Dollar to be converted to gold. Full Story

Billionaire Tim Draper: Only Criminals Will Use Fiat Money, As Cryptos Will Hit Mainstream in Next Few Years

Legendary billionaire venture capitalist, Tim Draper has predicted that in the next five years, fiat currencies will only be used by those involved in illicit activities.

According to the well-known bitcoin (BTC) bull, cryptocurrencies will achieve mainstream adoption within the next few years – while fiat money will mostly be used by criminals. Draper’s comments came during an interview (on February 18th) with Fox Business in which he told the financial news outlet that cryptocurrency transactions can be tracked easily through block explorers.

Draper, who acquired 30,000 bitcoins during a US Marshals Service auction (after they had been seized from Silk Road’s black markets), remarked:
“The criminals will still want to operate with cash, because they catch everybody who is trying to use Bitcoin.”

Last year in August, an agent working for the US Drug Enforcement Administration (DEA) had said that it was easier for her department to monitor cryptocurrency transactions – when compared to illegal deals conducted using fiat money. The agent had explained that block explorers provide advanced tools which allow government agencies to accurately track crypto transactions on the blockchain.

During his latest interview, Draper also mentioned that he thinks the fiat money in his bank account is not as secure as his cryptocurrency holdings. According to the business tycoon:
“My bank is constantly under a hack attack.”